The oldest covered bridge in Lancaster County, PA is now revitalized and open to traffic.

Pequea No. 7, known locally as Neff’s Mill Covered Bridge, had been rated in poor overall condition. The structural timber was deteriorating and the timber deck showing major signs of wear and tear. Originally built in 1875, the bridge has stood for many years. 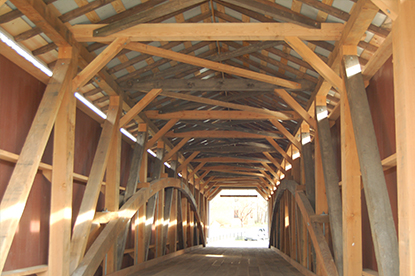 The 103-foot-long structure is the second most highly traveled covered bridge in the county, supporting close to 1,200 vehicles per day. As it is listed on the National Register of Historic Places, the design and reconstruction needed to maintain as much historic integrity as possible.

Owned by the County, it’s one of about 20 covered bridges the local government agency maintains in the area.

RETTEW worked closely with the County facilities department and contractor J. D. Eckman to salvage as much of the original structure as possible.

While the bridge was slated for repair in the County’s Bridge Capital Improvement Plan, no County funds were used to do so. The funding for engineering work came from Pennsylvania’s Municipal Liquid Fuels Program, which funds a range of projects supporting maintenance and construction on public roads. The construction portion was funded through Act 13, which includes impact fees paid by oil and gas companies that are then distributed to municipalities.

Construction began in May 2018, and less than eight months later, the bridge has been reopened!

RETTEW’s redesign called for re-using existing timbers and replacing deteriorating timber with in-kind wood. This enabled the project to move forward with a stamp of approval from the Pennsylvania State Historic Preservation Office.

Updating a bridge like this enhances safety and community infrastructure and decreases long-term maintenance costs, while also preserving historic character. RETTEW is proud to be part of preserving such a cultural icon in Lancaster County!

To say 2020 was a challenging year would be an understatement! As we turn the calendar to 2021,…

Through a nearly $1 million grant from NATO’s Science for Peace and Security Programme, RETTEW geophysicist and Franklin…