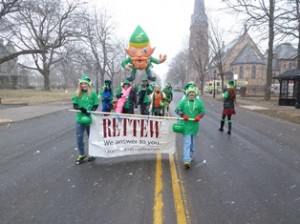 RETTEW is excited to announce a $1,000 donation to Williamsport’s PublicARTWORKS, awarded as a result of RETTEW’s enthusiasm while marching in Williamsport’s St. Patrick’s Day Parade.

RETTEW’s Leprechaun Brigade guided “Lucky,” a giant Leprechaun balloon, through the city streets during the second annual parade. RETTEW employees and their families, along with members of the PublicARTWORKS committee, were dressed in Irish flare, chanting limericks and tossing gold-coin chocolates to the crowd. Although snowflakes fell and the temperature remained unseasonably low, it did not dim their enthusiasm.

Clear Channel Radio Williamsport promised $1,000 to the most spirited parade marchers, to be awarded to the charity of the winner’s choice. Clear Channel selected RETTEW as the recipient of the prize.

RETTEW donated its winnings to PublicARTWORKS, a nonprofit with a mission dedicated to the promotion, awareness and expansion of public art opportunities in the community. The organization is a subcommittee of the Lycoming County Celebrates the Arts Alliance, and raises money to commission artists to create and install pieces of artwork for the public to enjoy along the City’s Riverwalk and, by request, at other public spaces in Williamsport’s urbanized area.

“It’s part of RETTEW’s mission to support the local community, and what better way to do so than having fun and interacting with people in a parade!” said RETTEW’s Regional Manager Laura Templeton, also a board member of PublicARTWORKS.