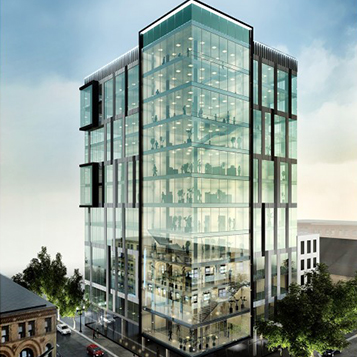 Twelve stories of glass and steel with 360-degree views.

The steel beams for the latest commercial development project in the urban center of Allentown are fully in place.

RETTEW has partnered with City Center Lehigh Valley on several commercial development projects in downtown Allentown. The most recent project now in progress, Tower Six, is well on its way to hosting 145,000-square-feet of office space.

At the corner of Sixth and Hamilton streets, the building will be 180 feet tall, and is already about 60 percent leased.

Spillman Farmer Architects designed the structure and Serfass Construction is managing the project. RETTEW has continued its work on City Center projects by providing land development and surveying services.

This project is part of a major revitalization in downtown Allentown, transforming a key urban area in the Northeast. City Center’s vision for and execution of Class A office space, retail, and entertainment venues, paired with local market-rate housing options, has helped the city experience a rebirth.