You have to be able to explain it to your grandmother.

That’s what Albert Einstein said about truly understanding science, “You do not really understand something unless you can explain it to your grandmother.”

At last week’s North Museum Science and Engineering Fair in Lancaster, PA, RETTEW staff judged and presented the Einstein’s Grandmother award to the best communicator at the event.

Tim Bechtel, geophysicist, served as one of the judges at the event. Winners at the event advance to the Intel International Science and Engineering Fair, the world’s largest international pre-college science competition. 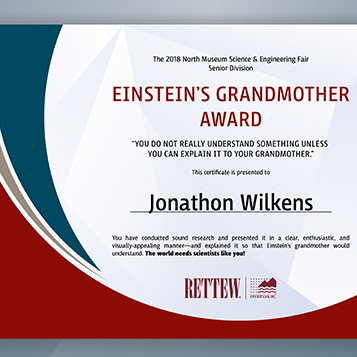 As part of the fair, RETTEW sponsored the Einstein’s Grandmother Award. The award honors the high school student who best engages the audience on his or her topic and explains it clearly.

This year’s winner was Jonathon Wilkins, a senior at Pequea Valley High School. His project was a mobile app that automatically splits a bill into parts so a group can pay individual amounts. He created the app to assist his older brother, who lives with four roommates and needs to split utility costs and other bills.

Tim commented, “He stood for the entire fair, actively engaging passers-by. Jonathon’s explanation was clear, and was delivered enthusiastically and with good humor.”

RETTEW is passionate about supporting the education of the next generation of scientists and engineers. Congrats, Jonathon!