RETTEW’s staff are passionate about changing our communities and the world for the better. 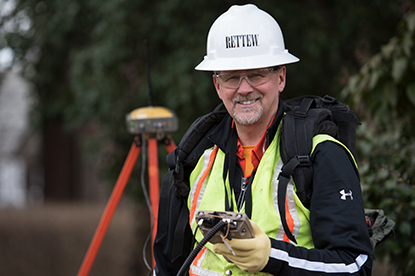 The piece included parts of an interview with Tim Bechtel, PhD, Geophysicist at RETTEW.

Below are excerpts from the article:

“Since war broke out four years ago between Ukrainian forces and Russian-backed rebels in eastern Ukraine, landmines and unexploded ordnance have littered the soil there, exposing farmers and others to the risk of injury or death.

Tim Bechtel wants to remove the risk, even after the conflict ends…

For the last three years, Bechtel has been working with an international team to develop a low-cost landmine-detection robot, one that could speed up the process for removing landmines. Their work has been funded by a $1 million grant from a NATO science program…

Hundreds of people have been killed in Ukraine by landmines since 2014, while thousands more have been injured… A landmine costs only a few dollars to make. But the cost to remove one ranges from about $300 to $500. And the work is painstakingly slow. It usually involves probing with a sapper spike, metal-detector sweeps and explosives-sniffing dogs.

At the current rate of landmine removal, Bechtel said it would take 500 to 1,000 years to get them all out of the ground. And that’s not accounting for new mines that armed groups are either buying or digging up and replacing.

The robots can be controlled remotely and move quickly, allowing them to cover more ground in a shorter period of time. 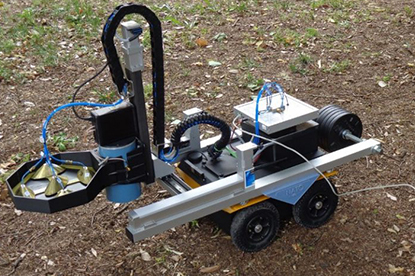 Bechtel said the prototype robot looks like a rugged, weatherproof remote-control car. But it’s not racing for fun or for profit. It’s got a life-saving job…

The project’s open-source design means that local governments and people in areas affected by landmines could access the blueprints and build or customize their own detection robots.

Back in the U.S., Bechtel said he sees opportunities to use a similar robot to help contractors detect buried gas and water lines, including non-metallic and fiber optic lines.

An automated robot also could be programmed to map a new job site, saving staff time. It might also be helpful in detecting the contents of a building’s foundation, so renovation contractors can avoid accidentally cutting through electrical conduits or steel rebar used to reinforce concrete.”