In honor of the retirement of the company’s former CEO, RETTEW recently established the George W. Rettew, Jr. Endowed Scholarship at Thaddeus Stevens College of Technology. Initially funded at $17,000, the scholarship will be awarded annually to a student in need. 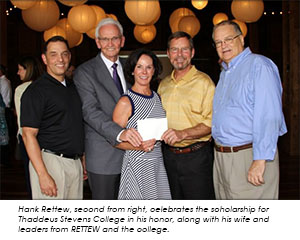 George “Hank” Rettew is an advisory board member of the college, and received an honorary doctorate degree in public service from the school in 2012, recognizing his service and contributions to the community. He joined RETTEW in 1973, and while growing the firm he also spent decades being involved in leadership roles throughout numerous business organizations and nonprofits in Lancaster County. Although officially retired, Hank maintains his role as chairman of RETTEW’s board of directors.

Thaddeus Stevens’ mission is to educate Pennsylvania’s economically and socially disadvantaged, as well as other qualified students, aiming to support adults in finding skilled employment. For more than 100 years, the college has provided a two-year program, and offers on-campus housing, intercollegiate athletics, and full scholarships to more than 65 percent of its students. In the graduating class of 2012, 96 percent had a job after graduating. In the 2014 graduating class, one-third of the class had no debt, and the rest averaged only $7,100 in student loan debt.

Thaddeus Stevens’ commitment to creating a skilled workforce and its encouragement of students and alumni to bring change to their communities perfectly mirrors Hank’s dedication to the Lancaster region. Through his technical abilities and hard work, Hank steadily built a profitable, well-known business in Central Pennsylvania. His legacy is reflected in RETTEW’s continual growth and longevity, and providing such a scholarship in his name supplies students with the chance to do the same.

“To ensure Hank’s legacy of giving back to the community continues, we could think of no better way to honor his retirement than to establish this scholarship,” said Mark Lauriello, RETTEW president and CEO.