On Sept. 19 the Hermitage Municipal Authority and RETTEW hosted a tour of the authority’s advanced wastewater treatment and energy facility. More than 100 people attended, most from the Western Pennsylvania Water Pollution 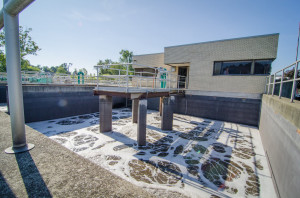 Designed in part by Jason Wert of RETTEW, the authority’s wastewater treatment facility – opened in May – uses advanced anaerobic digestion to break down waste and release biogas. The plant then uses the biogas to produce electricity and heating for the site. By recycling the waste, more than 15,000 gallons of waste per week is no longer delivered to landfills.

“We’re proud to have a facility so committed to recycling and renewable energy,” said Tom Darby – Manager of the Hermitage Municipal Authority. “We look to continue to make improvements in the future.”

The facility’s operations separate waste from liquid, purifying the liquid and then releasing it to local waterways. The waste is passed through a thermophilic digester, a heating conductor operating at about 135 degrees Fahrenheit. The waste then moves through a second digester, this one a mesophilic type, heating the waste to about 95 degrees Fahrenheit. Both of the digesters generate biogas as the waste rises in temperature.

The biogas is then collected, stored, and purified before being used onsite to generate the authority’s energy needs. The gas is about 65 percent natural gas. Cycled through a combined heat and power system, the biogas produces about 500 kilowatts of power, with a total capacity of around 600 kilowatts of power. The facility now exclusively relies on its own power generation.

The authority also accepts food waste including grease, beer and wine, and dairy products, using them in its waste recycling process. This reduces the quantity of food waste heading to local landfills, as well as reduces cost to business operators producing food waste.

Any solid waste left from the process is sent off site for reuse as a soil amendment and substitute at local greenhouses. 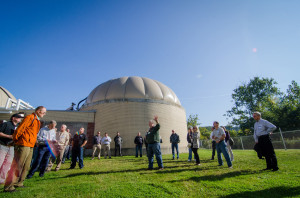 “The process combines several technical features to enable efficient and cost-saving results,” Wert said. “Many local businesses and the agriculture industry is benefitting, as well as the authority.”

RETTEW is currently evaluating the viability of biogas conversion to compressed natural gas (CNG) for renewable fuel generation. For fleets with high-mileage operating locally, using CNG could greatly benefit both the authority and the City of Hermitage’s fleet operations costs. The biogas would be compressed, go through a process to remove carbon dioxide, and then compressed again before made available to dispense as fuel.