The Jury Street Bridge, where the ceremony was held, is one of only two access points connecting the Cowtown residential area to the rest of the borough. During Tropical Storm Lee in 2011, floodwaters damaged the underside of the structure. Following inspection by RETTEW, employed as the borough engineer, the bridge was closed until it could be replaced. The Market Street Bridge suffered similar damage, though not as severe. The sidewalk was closed permanently, as parts of it had crumbled away entirely from the flooding.

“These two bridges are small but integral parts to connecting our community,” Borough Mayor John Hoerner said. “We’ve worked hard to gather funding, and are excited to begin the process of installing new bridges today.”

Highspire Borough worked with RETTEW and the county steadily throughout the past few years to secure funds for the bridge replacements, ensuring that no local or county tax dollars were used toward the new structures. The Pennsylvania Emergency Management Agency and the Federal Emergency Management Agency together awarded $46,749 for rebuilding the Jury Street Bridge and $64,941 for the Market Street Bridge. Through Dauphin County’s Community Development Block Grant Program, the borough also secured $150,000 to cover engineering design costs. And through the Pennsylvania Department of Community and Economic Development and Dauphin County, the borough also received $313,199 for Jury Street’s construction, and $308,103 for Market Street. The total cost for both bridges is $882,992, all of which will be funded through these grants and awarded monies. 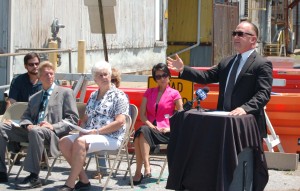 Commissioner George P. Hartwick, III, said. “This much-needed funding is helping us cope with unmet infrastructure needs beyond those addressed by other forms of public and private assistance.”

The Jury Street Bridge will be replaced with a new precast concrete box culvert, with an 18-foot span and scour protection. The bridge will fit within existing concrete stream channel walls, and a pedestrian railing and chain-link fence will be added on either side. The Market Street Bridge will also be replaced with a precast concrete box culvert, with a 10-foot span, scour protection, and a new sidewalk and pedestrian railings installed.

Greenland Construction, of Clearfield, and Construction Masters Services, of Reading, will construct the Jury Street and Market Street bridges, respectively. Construction will begin shortly, with the intent to complete the projects in late 2015.

“By identifying worthwhile flood control projects, such as the bridge replacement projects in Highspire, we can plan a long-term, regional strategy that will minimize future flood damage and make our communities safer,’’ said Dauphin County Commissioner Mike Pries.