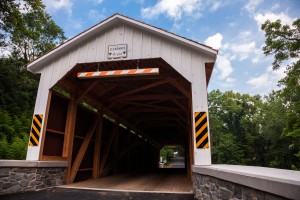 RETTEW is pleased to announce the firm’s project, Siegrist’s Mill Covered Bridge, was named a 2013 Envision Lancaster County Leadership Award winner in the large projects for heritage resources category. The Achievement Award is given to projects that preserve and celebrate the county’s heritage and demonstrate smart growth.

“We are proud to have been a part of a project with such value to the community,” said Dave Hoglund, bridge group manager at RETTEW.

The authentic wooden covered bridge spanning Chiques Creek on the border of West Hempfield and Rapho townships in Lancaster County was damaged by floodwaters in September 2011. Less than two years later, RETTEW managed the complete rebuild of the historic bridge using 19th-century design and integrating some salvaged materials.

Originally built in 1885, Siegrist’s Mill Covered Bridge is among the oldest of 20 county-owned covered wooden bridges. RETTEW worked with federal and state agencies to secure funding for the restoration. The engineers also coordinated with the Pennsylvania Historic & Museum Commission, the Pennsylvania Department of Environmental Protection, the U.S. Army Corps of Engineers, Rapho and West Hempfield townships, and nearby residents to ensure the design, schedule and plans were all in line with the county’s goals. RETTEW mitigated future flooding concerns by recommending the raising of the bridge 2 feet above its original foundation.

“It’s an honor to have assisted in breathing new life into an important piece of the county’s history,” Hoglund said. “The commitment of the county commissioners to maintain the integrity of our historic structures is an inspiring goal, and we’re glad it was recognized with this award.”