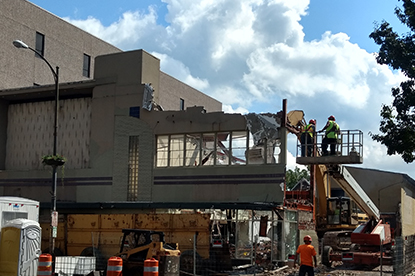 Farewell to those ‘80s metal and punk rock performances in downtown Allentown.

Crocodile Rock, a previously closed concert venue popular in the 1980s, was recently torn down to make way for an apartment and retail building. Across the street from RETTEW’s offices at 515 W. Hamilton St., the new structure will be built by City Center and modeled after the former Hotel Allen that once stood at Seventh and Hamilton streets.

As with many of the buildings in this revitalized corridor of downtown Allentown, RETTEW will be providing essential expertise. For this project on the former Croc Rock site at W. 520 Hamilton St., we’re completing boundary and topographic surveying, land development and stormwater management design and permitting, subsurface utility locating, a sewer planning module, and a Phase I environmental site assessment.

Crocodile Rock had continued hosting concerts until 2015, although the venue had lost its liquor license in 2013. The façade and structure was not deemed historic, and City Center purchased the lot from its owner, Joe Clark, before razing the building.

With the demolition complete, ground will be broken in the coming weeks, and building occupancy is expected in September 2018.